Despite the mythology and often-recited, “rose-colored” version of the origins of the Leonberger, the early history of the breed is actually quite clouded and tumultuou

The Leonberger emerged from the enthusiasms and exploits of Heinrich Essig (1809-1889), a successful politician with a genius for marketing and public relations. An alderman and a prominent citizen in Leonberg, Germany, Essig made a successful living as a professional animal trader who bought and sold dogs for a span of fifty years.

Essig’s strong suit was vision and marketing communications, not attention to the details of dog breeding! So, it was “chutzpah” rather than verifiable breeding records that led him in 1846 to declare the “creation” of the Leonberger. Whether Essig actually created a new breed by careful selection following genetically sound principles is rather doubtful. What we do know for certain is that Essig’s marketing genius resulted in such widespread popularization of the breed, that the Leonberger, as a breed, survived cries of outrage from breeders of Saint Bernards and Newfoundlands, from judges, and from the editors of dog magazines such as Der Hund.

At the same time, Essig had ardent loyalists who paid great sums for his dogs and defended him publicly. Through his marketing skill, Essig’s dogs found their way into the castles of royalty. They were exported as far away as United States, England, Newfoundland and Japan to the wealthy who desired large fashionable dogs.

Essig died in 1889 without ever defining a standard for the breed or a defensible description of his breeding program. It is a tribute to the qualities of the Leonberger that in spite of harsh criticism from the dog fancy establishment, there were enough enthusiastic owners to form, beginning in 1891, the first Leonberger club. Unfortunately, this first Leonberger club did not survive very long and it was not until 1895 that the “Internationaler Klub für Leonbergerhunde” was founded with Albert Kull as president. Kull was also the author of the first Leonberger Standard. With the eye of an artist he did a good enough job that this standard formed the foundation for all subsequent standards.

World War I almost rendered the breed extinct. If it were not for the dedication of two men, Karl Stadelmann and Otto Josenhans,  the breed may well have become a footnote in the history of German dogs. After the War, they scoured Germany searching for Leonbergers. They found 25. Of these, only five were suitable for breeding. Because of inflation and food shortages, it was unlikely that individuals could have personally and individually supported breeding programs, so in 1922 a group of seven people joined together to form a breeding cooperative. Within four years, they had selectively bred 350 Leonbergers. The organized breeding program of the cooperative brought about a revival of the breed, brought honor to the town, and provided foundation stock to establish several kennels. Most notably, these men established the official Breed Registry, which continues uninterrupted today.

In the early 1930s, the authoritarian control of the Third Reich began to influence the dog world, assuming control of all German breed registries. A Reich-governed Leonberger club was established. However, “unofficial? breeding, although very reduced, continued throughout the war in and around Leonberg. Both dogs and accurate records survived the destruction and the current German Leonberger Club was formed in 1948. Under the guidance of club president Robert Beutelspacher, the first modern-day standard and breeding regulations were written.

In 1975, the German Club brought all the Leonberger breed clubs from the major European nations together and founded the International Union of Leonberger Clubs. Eighteen national clubs including the Leonberger Club of America (since 1987) meet annually in Leonberg to preserve and protect the breed. 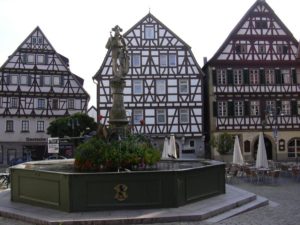